Αρχική International News Sandro Campagna: “The semifinal against Greece will be much more demanding –... 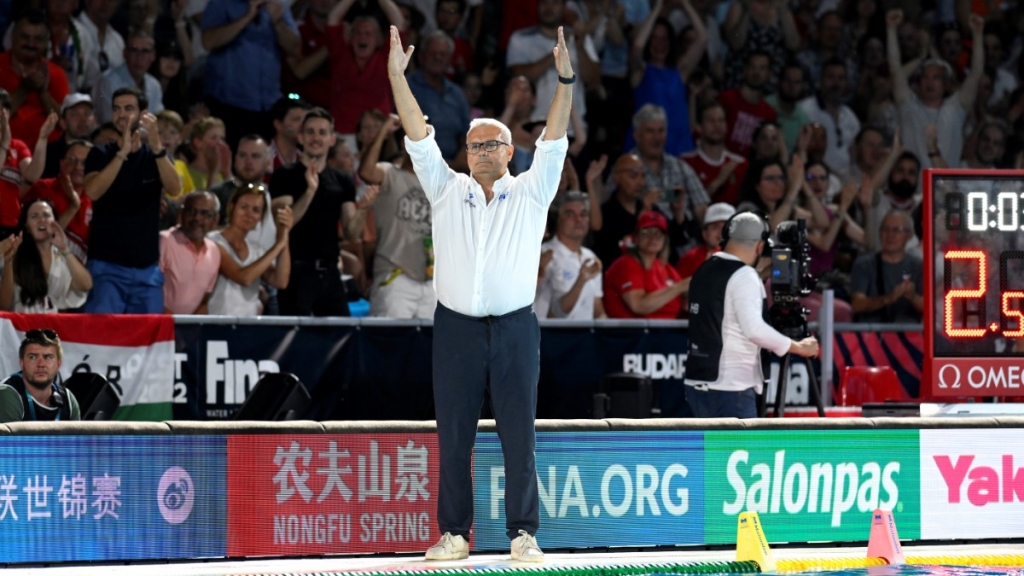 Extremely calm and with his usual chic but, “killer” attitude, Sandro Campagna went through a very physically and mentally demanding game against Hungary, getting an exciting win in Alfred Hajos last night making Settebello legendary again (11-10)!

Both when the Settebello found herslef ahead of the Magyars, and in the dramatic finale, when Hungary tried to create a bit of confusion in a desperate attempt to keep scoring and maybe equalize, Italians remained calm and united and Campagna even called a timeout with 3″ on the clock(!).

“It was a good match – explains Campagna to the microphone of Nicola Sangiorgio, on Rai2 – we stayed behind at the beginning, when they had a good percentage in extra-player, but we never disunited, we were always on the spot. I must say that there are some flaws in the finale, the last minute and a half (Hungary went from 7-11 to 10-11, ed) needs to be improved, but staying on +4 at home at 2’20 ‘ ‘from the end demands a lot of focus and hard work”.

Andrea Fondelli did not find his “scoring-spree” this time, but his match was also to be framed: the great player sacrificed himself in defense, both on the very strong perimeter of Tamas Marcz and covering the center, when all the regular defenders ended up out for fouls (exluded with subsitution). And forward he played the game with patience, resulting decisive in the construction of some key actions, such as that of 10-7. “It was a very emotional match in a fantastic stadium that pushed Hungary to the end – Fondelli claimed -. We knew it was within our reach; we were all phenomenal. We played like brothers and this is our strength. In addition to being teammates, we are true friends and help each other as much as possible. We played the game well. At the beginning, a goal wasn’t so easy to achieve. Play point to point. Turn off the enthusiasm and then strike. We thought we were going to reach the end in balance (even score), but instead we reached an incredible 11-7. Campagna had reminded us of when he had won as a player, he had told us not to be afraid, to play our water polo without being intimidated, to play having fun. I think we have succeeded. In the semifinals we will play with Greece vice Olympic champion. They make a very strong team and we start on an equal footing. We want to go all the way “.

Yesterday’s defense is what Campagna and Settebello are proud of. “They made a series of mistakes in extra-player, only Vamos created problems for us. This match, however, remains a quarter-final, in 48 hours it will be forgotten ”. For the most important game so far – semifinal, Greece vice-Olympic champion will face Italy – the World Champion of 2019. “It will be a much more difficult match from a psychological and technical point of view – concludes Campagna – Greece is also very strong physically, especially in the center with Kakaris. And he has experienced players like Fountoulis, Genidounias and Vlachopoulos, who is the real brains of the team. We will have to play a tight game, but it still has to be studied ”.